The latest FAO report on the State of World Fisheries and Aquaculture 2016 demonstrates that the global per capita fish consumption has risen to above 20 kg a year for the first time. According to the report, the world per capita fish consumption increased from an average of 9.9 kg in the 1960s to 14.4 kg in the 1990s and 19.7 kg in 2013, with preliminary estimates for 2014 and 2015 pointing towards further growth beyond 20 kg.

In addition, the report informs that for the first time the aquaculture sector’s contribution to the supply of fish for human consumption overtook that of wild-caught fish. At the same time, however, the authors of the report warn that natural marine resources are exploited so much that the whole system is not able to sustain. A global population is expected to reach approx. 9.7 billion by 2050. Today, there are more than 7 billion of us. Therefore, the choice of fish products from sustainable sources has never been so important if we want to ensure that future generations may also enjoy the nutritional value delivered to people through fish and seafood.

“I personally think this is a very good thing because it shows that over the past five decades, fisheries supply – which combines aquaculture, inland fisheries and marine fisheries – has outpaced human population growth very significantly,” says Manuel Barange, director of FAO Fisheries and Aquaculture Policy and Resources – “This is very significant because fisheries have a very much smaller footprint than other main sources of animal protein. Therefore increasing the consumption of fish is good for food security. Another factor for the boost in the per capita figure is a fact that more fish products are used for human consumption. In the 1960s, we used to eat about 67% of the fish we caught and cultured. Currently, it is about 87%. The remaining 13% is turned into animal feed.”

People, however, increasingly devastate the natural marine environment. Back in 1974, the FAO agency assessed that 90% of fish stocks are able to maintain their number. In 2013, this percentage decreased to 68.6%, which means that 31.4% of the resources have been so heavily exploited that we have threatened their biological existence. 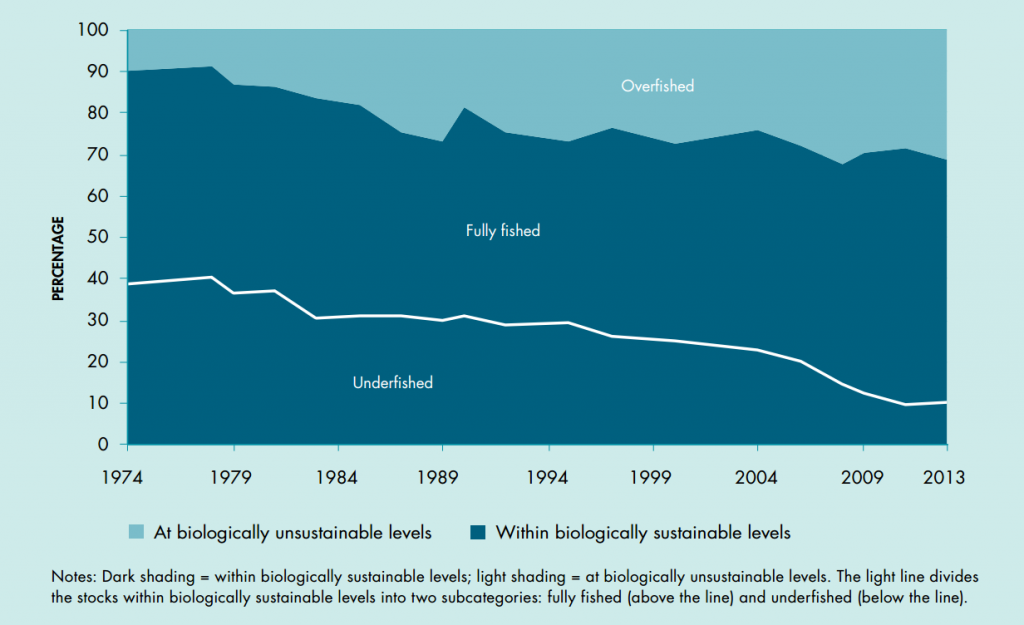 Source: FAO. 2016. The State of World Fisheries and Aquaculture 2016. Contributing to food security and nutrition for all. Rome. 39 p

This shows how important is the policy of preventing overfishing coordinated at a global level. Overfishing is not only an ecological problem, but also social and economic one. Fisheries is the main source of income of about 57 million people all over the world.

“Life below water, which the Sustainable Development Agenda commits us to conserve, is a major ally in our effort to meet a host of challenges, from food security to climate change,” FAO Director-General José Graziano da Silva. “This report shows that capture fisheries can be managed sustainably, while also pointing to the enormous and growing potential of aquaculture to boost human nutrition and support livelihoods with productive jobs.”

Global per capita fish consumption rises above 20 kilograms a year