Monograph: Developing a rational basis for monitoring birds’ bycatch for the purpose of the sustainable management of coastal fisheries in NATURA 2000 marine areas

In view of large controversies revealed during public consultation on programs proposed for bird protection against mortality caused by fisheries between a team preparing these programs, the Ministry of the Environment and non-governmental organizations and fishers performing catches in the internal sea and coastal waters of the Polish Marine Areas, the Board of Fishers Association of Szczecin and Kamienski Lagoons and Dąbie Lake applied for funds to the operational program “Fishes” to finance pilot bycatch monitoring in the coastal fisheries (vessels up to 12 m in length) in three areas of NATURA 2000 – the Szczecin Lagoon and the Kamieński Lagoon, the Pomeranian Bay and the Puck Bay. This monograph is a summary of the results of these studies.

The most important assumption, which distinguishes the presented monitoring from other programs of this type, was to base it on real data on fishing effort expressed in net-meter-days (NMD). The system of registering fish catches in Poland enables this approach instead of relating bycatch to the number of vessels, which used to be a practice in previously published works. As the preliminary analysis of data from the Fisheries Monitoring Center (FMC) showed, raw data from this source are not useful for calculating the fishing effort of the coastal fisheries performing catches with gillnets, necessary for the implementation of these project objectives. The most serious obstacle preventing the direct use of the data from the FMC was the inability to select records due to the type of nets, while this is an important variable determining the size of the bycatch of birds. However, the type of gear could be inferred indirectly based on a mesh size and target species of the catch or on the basis of the catch composition (the dominant species). Unfortunately, the mesh size and target species are not required data in monthly catch reports. The assignment of records to the type of nets required a detailed analysis of the catch composition. Due to the fact that estimating the size of the bycatch of birds in relation to the total fishing effort requires the use of a standardized effort unit (net meters/catch day), it was necessary to verify and supplement the records in the FMC database by the number of fishing gear and the time of catches. In the course of a detailed analysis of the database and during direct fishing observations it was shown that there is a very large variation in the characteristics and the size of fishing effort between individual fishing vessels and depending on the month of catches. During the observations it was found, for example, that the length of nets used by fishers ranged from 70 to 7700 m and the catch time from 2.5 to 216 hours. In turn, in the course of a detailed analysis of the FMC database, it was stated that the activity of vessels during the months covered by the analysis (October–April) ranged from several to 264 catch records.

Thanks to basing on the actual fishing effort it was possible to determine a representative number of observed cruises broken down into fishing bases and modeling the obtained bycatch quantities and into the total fishing effort realized in a given sea area. 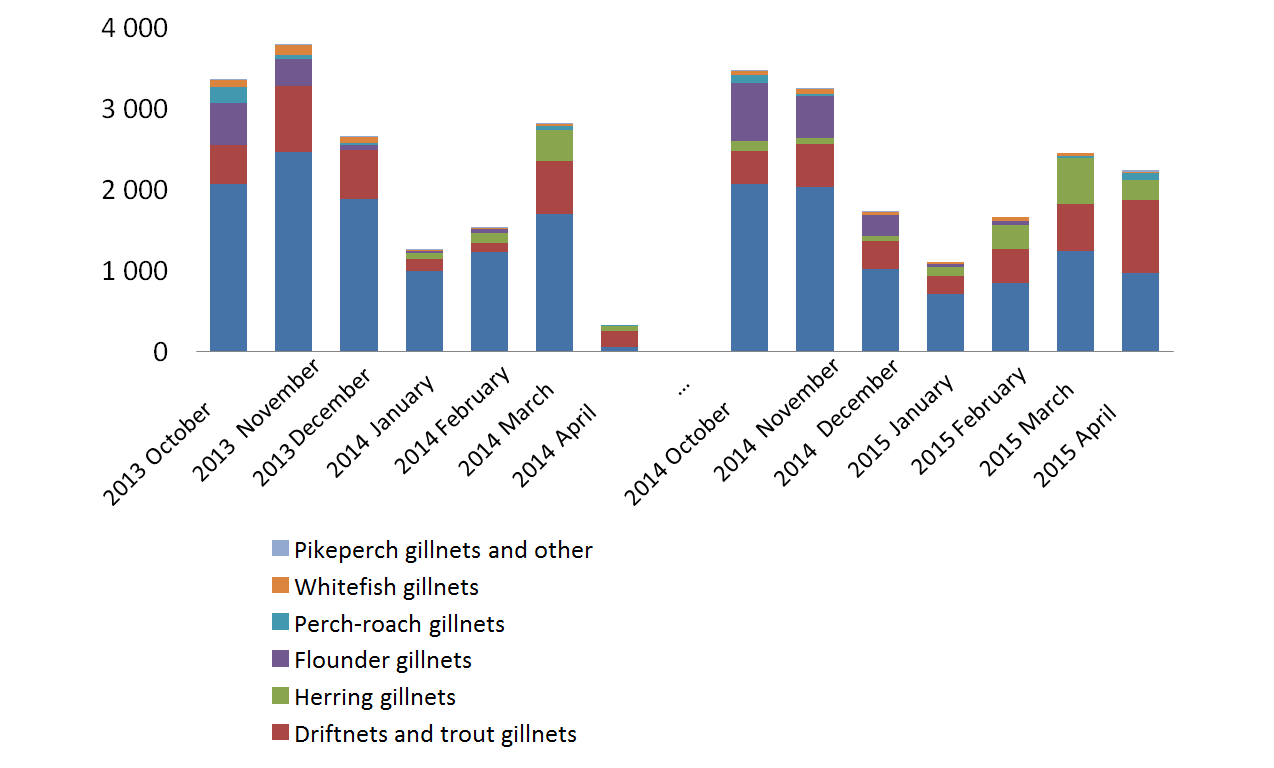 Example of results of the analysis of the fishing effort variability – temporal variability of using fishing set nets by fishing boats up to 12 m in length in the area of PLB Puck Bay from October to April 2013/14 and 2014/2015 (unit of vertical axis: 1000 NMD)

The monograph presents the conditions of the coastal fisheries in the analyzed areas of NATURA 2000 including: the diversification of fishing vessels, types and techniques of nets’ servicing, reporting obligations and the spatial and temporal limitations resulting from the regulations governing the fisheries that occurred during the implementation of the research. The methodology of the detailed analysis of the FMC database covering the selection, verification and filling of gaps in the data was discussed in detail. For the purpose of specifying a representative scheme for the research effort, the fishing activity expressed in the number of records referring to the return to a port with catches in 2013 (January–April and October–December) was taken into account. The largest number of catches was recorded in the Puck Bay (5808), then in the Pomeranian Bay (2978), and the least in the Szczecin and Kamienski Lagoons (1322). The project provided for financing the observation of 120 cruises, therefore it was decided that in the case of the Pomeranian Bay, only a reconnaissance in the coastal zone in the area of the Świna and Dziwna estuary would be conducted within the project. A total of 37 fishing vessels participated in the research period from November 2014 to April 2015.

In the Szczecin Lagoon and the Kamienski Lagoon, the observers participated in 58 catches with the overall effort of 358 678 NMD, representing 5.6% of the fishing effort registered in this area from October 1, 2014 to April 30, 2015. In more than 80% of net sets, no bycatch of birds was found. In total, 137 bird specimens were recorded. Greater scaup Aythya marila were the most abundant (69 indiv. caught), then great crested grebe Podiceps cristatus (29 indiv.), and common goldeneye Bucephala clangula (15 indiv.). During the analyzed period, the total fishing effort in the Szczecin Lagoon was 5 974.4 thousand NMD, with pikeperch and perch-roach gillnets as the most commonly used gear, in the Kamienski Lagoon it was only 370.2 thousand NMD with the dominance of pikeperch gillnets. There were 52 active vessels in the Szczecin Lagoon and 9 in the Kamienski Lagoon.

In the Pomeranian Bay in the area of the Świna and Dziwna estuary there were 15 cruises and the fishing effort amounted to 49 170 NMD. In almost 70% of the net sets, no by-catch was found. In total, 91 birds were registered, including one case in which for one set there were up to 13 long-tailed duck Clangula hyemalis. It was the most frequently caught species (68 indiv.). In addition, greater scaup (14 indiv.) and common scotter Melanitta nigra (13 indiv.) were registered in a greater number. In the Pomeranian Bay, 110 vessels up to 12 m in length operated in the course of the research, with the fishing effort of 14 953.1 thousand NMD. Cod gillnets’ were the most frequently used.

At the Puck Bay, 105 cruises covering 196 558 NMD were observed, representing 1.2% of the total fishing effort registered in the FMC. In over 92% of the net sets, no bycatch was found. In total, 66 birds were registered, including mostly long-tailed duck (16 indiv.), velvet scoter Melanitta fusca (13 indiv.), razorbill Alca torda (12 indiv. including 10 indiv. in one set) and common goldeneye (11 indiv.). In the Puck Pay, in the course of the research, 161 vessels operated and spent 15 932.6 thousand NMD. Cod gillnets were the most often used, trout gillnets and flounder gillnets were also frequent.

Based on the data from observations, the optimal generalized linear regression (GLM) model of bycatch was tested and iteratively selected using the AIC and BIC information criteria. Additionally, the collinearity of explanatory variables was analyzed. The model was constructed on the basis of the bycatch size (explained variable) and: the catch period (month), water basin, type of gear, length and time of exposure, depth and distance from the shore of the catch site (explanatory variables). The analyzed explanatory variables were characterized by a strong asymmetry with a large number of “zero” values. As a result of testing the models, it was shown that the optimal model describes the bycatch as statistically significantly dependent on: water basin, month, type of gear and length of the net set, while the latter parameter was interchangeable with the effort expressed in NMD. With the use of this model, the prediction on the bycatch of birds based on the data on the fishing effort from the FMC from the research period (October 2014–April 2015) and the period a year earlier (October 2013–April 2014) was made. In the Puck Bay, the bycatch of birds in the seasons 2013–14 and 2014–15 was estimated on the basis of a model at the level of 3359–3173 individuals. Cod gillnets were the most responsible for the bycatch due to the largest fishing effort of this type of nets registered in the FMC database. In the Szczecin and Kamienski Lagoons, the bycatch of birds was estimated at the level of 2487–2930 individuals, in the 2013–14 and 2014–15 seasons, respectively. Pikeperch gillnets were the most responsible for the bycatch, both due to the highest model average bycatch as well as the largest fishing effort of this type of nets recorded in the FMC database. 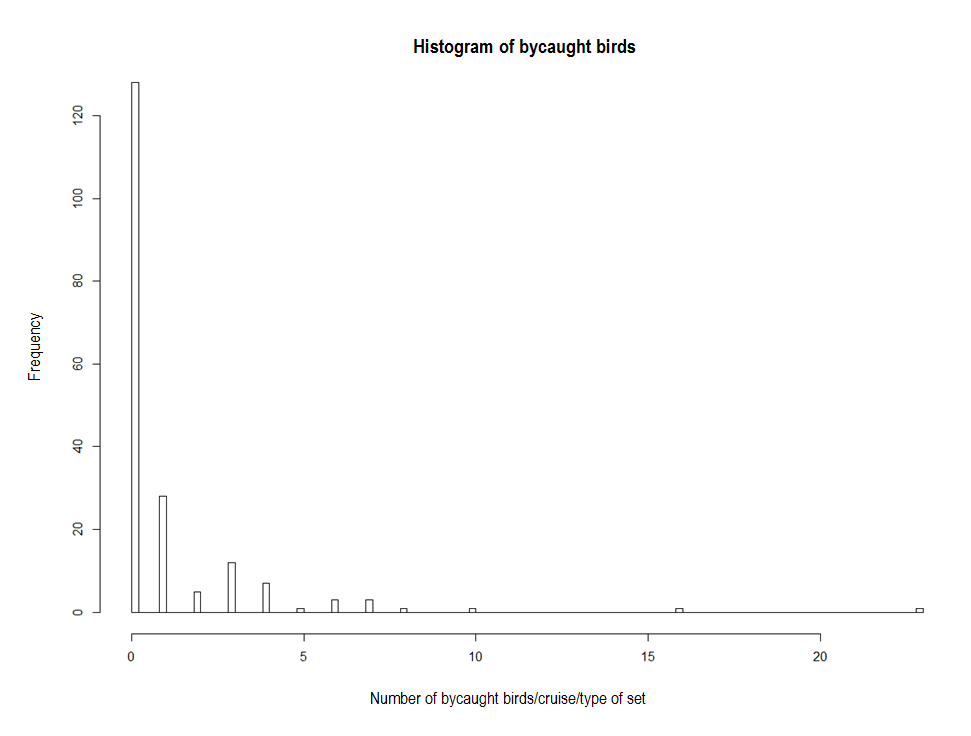 The values shown differ significantly from those presented as the justification for the significant impact of the fisheries on the bycatch of birds in both areas of NATURA 2000. An overstatement of birds’ mortality might have resulted from the lack of analysis of the actual fishing effort in previous surveys. It should be emphasized that with the current system of reporting catches by vessels up to 12 meters in length, the estimation of the fishing effort is extremely time-consuming and requires extensive knowledge of current fishing practices.

In the discussion, a provisional estimate of the bycatch scale was made in relation to the NATURA 2000 areas identified as part of the wildlife inventory of birds exposed to bycatch (species found during fishing observations and/or reported in fishing registers). In case of the Szczecinski and Kamienski Lagoons, the bycatch problem may concern 2.4% of local populations of these bird species and 6.6% in case of the Puck Bay. However, these values should be verified on the basis of simultaneous monitoring of seasonal abundance of birds and the bycatch monitoring.

The possibility of observing catches from the board of an accompanying vessel and using video monitoring was also examined within the project. The first option was excluded due to the safety of the vessels at a distance allowing the observation of a fishing operation. The second method, despite many technical problems, has the potential to be used for the bycatch monitoring. In addition, the method of voluntary bird bycatch registers, both in paper and electronic form, was also tested. Online register with the guide to identify birds has not been used by any fisher. 35 paper registers were obtained. They were also distributed with the bird identification guide. A total of 1514 fishing records were entered, during which fishers found 802 bycaught birds. In the data part there was no information necessary to calculate NMD – the catch time or the length of nets. Many records could not be assigned to the type of nets. Despite these problems, in the opinion of project implementers, bycatch registers may be an important source of information on the bycatch of birds, as long as the fishers maintain a regular contact with the institution collecting this data, and these reports would be remunerated due to an additional burden.

An example of one of the problems related to the analysis of recordings from the bycatch video monitoring on coastal fishing vessels – morning hauling of the net set, the image recorded against the sunlight.

The monograph describes the results of a survey of attitudes and beliefs of fishers regarding the protection of seabirds. The survey consisted of 14 questions, including open ones. 138 fishers from 33 fishing bases took part in the research. The results clearly indicate a crisis of confidence among the fishers, especially those from the Puck Bay region, to scientific institutions in connection with the project of closure of fishing grounds during migration and wintering of sea birds.